Carlene Carter sets return to Exit/In, site of her career start, possibly for the last time

Carlene Carter can trace the start of her professional career to a three-song audition at Nashville’s Exit/In while still a teenager. That audition for Hugh Bennet, who ran the club’s weekly writers night during the early days of the legendary venue, opened the door to her becoming a full-fledged professional musician. On Wednesday, November 16, Carlene – along with her band The Lucky Ones -- will again be playing the landmark club at least one more time.

The Exit/In has stood at 2208 Elliston Place since 1971, but will be closing at the end of November as developers and preservationists ponder its future or potential demise. That means it’s possible that Carlene’s November 16th show could very well be her farewell performance at the place where it all began for her. Over the course of its 51+ year history, the Exit/In has hosted such greats as Linda Ronstadt, R.E.M., the Allman Brothers, Leonard Cohen, Muddy Waters, Willie Nelson as well as June Carter and Johnny Cash, Carlene’s mother and stepfather, so there’s added meaning to this "Carter Girl" should it be shut forever.

On the heels of that fateful long-ago audition, Carlene, a third-generation member of the Carter Family, went on to pursue a career in music that took her to England to record with New Wave standard bearers The Rumour and to California. She went on to sign with a major label and scored a Grammy-nomination and several big hits including "I Fell In Love," "Come On Back," and "Every Little Thing," each of which went Top 3 on Billboard’s Country Chart.

She went on to be an accomplished songwriter for others and penned "Easy From Now On," an early hit for Emmylou Harris, the title track for the Doobie Brothers’ One Step Closer album, as well as tracks for various rock and country artists such as The Go-Go’s, Nick Lowe, Paul Carrack, Squeeze, Johnny Cash, Miranda Lambert and many others. Apart from duets with the likes of Dave Edmunds, John Mellencamp, Willie Nelson, Kris Kristofferson, Vince Gill, Marty Stuart and Elizabeth Cook, she had returned to the Carter Family time and time again and in recent years has become the standard bearer of the legendary "first family of country music."

Her November 16 performance at the Exit/In will include some special guests including the legendary Tracy Nelson, who came to fame fronting seminal San Francisco band Mother Earth. "I saw Tracy at the Exit/In in the early '70s," Carlene recalls, adding, "that experience changed my life forever." Inspired by Nelson’s bravura performance, she decided to pursue music full-time melding country, blues and a commitment to "rock like hell" thereafter and that’s how it’s worked out ever since.

Tickets for Carlene Carter and The Lucky Ones with special guests are available now:

An Evening with Carlene Carter and The Lucky Ones 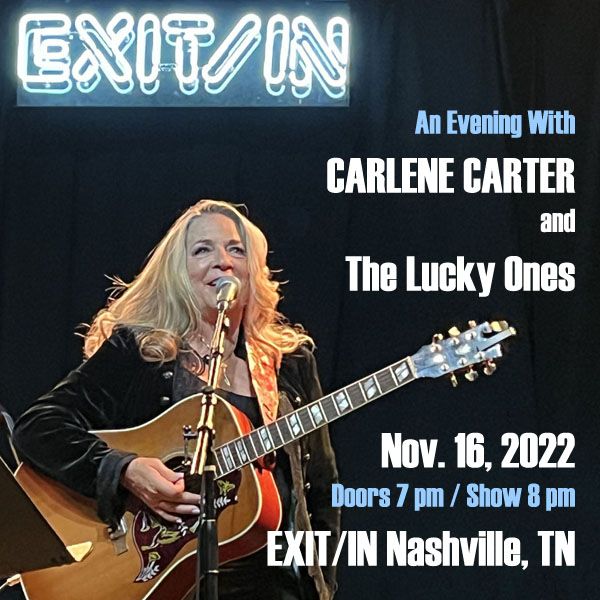